Eudaimonia – Journal for Legal, Political and Social Theory and Philosophy

The Review of Works from the Third Student Conference on the Theory and Philosophy of Law on Judicial Authority held at the Faculty of Law of the University of Belgrade in cooperation with the Serbian Association for Legal and Social Philosophy (IVR Serbia) on October 21, 2016. 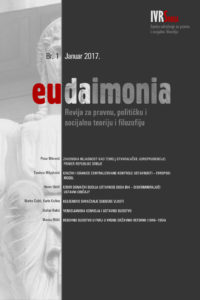 STATUTORY VAGUENESS AS FOUNDATION OF CREATIVE JURISRUDENCE: THE EXAMPLE OF SERBIA

The aim of this paper is to make a contribution to the analysis of judicial creativity in Serbia. More precisely, the claim that is advocated is that adjudication in cases of vagueness necessarily involves law-making. The paper consists of six parts: The introductory part emphasizes the importance of this issue in modern jurisprudence. The second part deals with the analysis of statutory indeterminacies with the primary focus on vagueness. In the next part, I discuss two questions: (1) who is obliged to resolve the problem of statutory vagueness and (2) what are the ways through which Serbian courts perform aforementioned activity. The fourth part lays down arguments that support my conclusion that the judicial process of resolving the problem of vagueness constitutes creative activity, while the fifth  deals with possible objections against this claim. Finally, the sixth part explicates the very importance of the paper, as well as its clear limitations in terms of explanatory power.

In this paper I will explore the genesis and main features of the European model, along with the reasons why it was established  in the European countries within the three generations – first after the World War II, later in Spain and Portugal, and at last in postcommunist countries during the 90s. The last chapter will be dedicated to the matter of potential crisis of the European model – I will discuss the problems emerging from the practice of the constitutional courts. Are there internal or external pressures for the decentralisation of the constitutional review in Europe?

KELSEN’S UNDERSTANDING OF THE JUDICIAL POWER

Contrary to the classical doctrine of separation of powers, Austrian legal theorist Hans Kelsen claims that there are only two state powers and that what distinguishes them is their function – law creation (legislative power) and law application (executive power). The aim of this paper is to present Kelsen’s view of the judicial power (function) which he situates within the executive power and therefore defines its function as the application of law. However, Kelsen points out that the judicial power, in addition to applying the law, takes part in its creation.

THE VENICE COMMISSION AND CONSTITUTIONAL COURTS

Marica Mišić, Student of Master Studies at University of Belgrade Faculty of Law

Cessation of relations with The Soviet Union 1948/1949. resulted in the abandoning the Soviet model in the regulation of political and legal system, as well as striving for independence of the Federal People’s Republic of Yugoslavia. Then the state reforms have been launched which reflected somewhat in the judicial system. The Organization of national courts Act which was initially adopted in 1945, and then adopted again with the modification the following year, was valid til the passing The Courts Act in 1954. The significance of this act, with regard of the procedure it was passed is in its norms which had power of constitutional provisions because the the procedure was the same as for adopting the constitutional, as well as in the paving the way for the professionalization of judicial duty. It used to be the object of study of constitutional doctrines, but nowadays the theoretical and historical legal disciplines don’t deal with it, and that’s why it is going to be given its display which laid the foundation of the legal system of socialist Yugoslavia, torn of USSR influences.

FRAGILE DEMOCRACIES AND THE DECLINE OF DEMOCRATIC INSTITUTIONS

An interview with professor Samuel Issacharoff

Samuel Issacharoff is a Constitutional law professor at NYU School of Law. His wide-ranging research deals with issues in civil procedure, constitutional law, particularly with regard to voting rights and electoral systems. Numerous articles he wrote helped to establish the law of political process, a new field of study which mainly examines the relationship between democratic principles and the electoral participation of racial, language, and political minorities. Eudaimonia’s editorial board brought this interview after Issacharoff’s great keynote lecture delivered at the International Conference New Politics of Decisionism, which was organised by the Serbian Association for Legal and Social Philosophy and the Faculty of Law in Belgrade. The main issues we’ve addressed in this interview are Issacharoff’s latest book Fragile Democracies: Contested Power in the Era of Constitutional Courts and the decline of democratic institutions that we are witnessing today in the Balkans, but in the Western democracies as well.