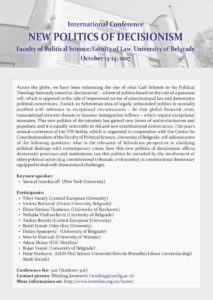 Across the globe, we have been witnessing the rise of what Carl Schmitt in his Political Theology famously coined as ‘decisionism’ – a form of politics based on the rule of a personal will, which is opposed to the rule of impersonal norms of constitutional law and democratic political conventions. Zurück zu Schmittian idea of legally unbounded politics is normally justified with reference to exceptional circumstances – be that global financial crisis, transnational terrorist threats or massive immigration inflows – which require exceptional measures. This new politics of decisionism has gained new forms of authoritarianism and populism, and it is equally noticeable in old and new constitutional democracies. This year’s annual conference of the IVR Serbia, which is organized in cooperation with the Centre for Constitutionalism of the Faculty of Political Science, University of Belgrade, will address some of the following questions: what is the relevance of Schmittian perspective in clarifying political dealings with contemporary crises; how this new politics of decisionism affects democratic processes and institutions; can this politics be curtailed by the involvement of other political actors (e.g. constitutional tribunals, civil society); is constitutional democracy equipped to deal with these sorts of challenges.