Eudaimonia – Journal for Legal, Political and Social Theory and Philosophy

The Review of Works from the Fourth Student Conference on the Theory and Philosophy of Law held at the Faculty of Law of the University of Belgrade in cooperation with the Serbian Association for Legal and Social Philosophy (IVR Serbia) on December 8, 2017. 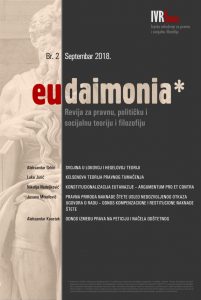 Property is one of the fundamental notions of economy, law, and politics. But can it be treated as a philosophical question? Although it certainly is not an important topic in a general philosophical inquiry, it is, undoubtedly, a prominent subject of political and legal philosophy. The problems such as the origin of property, its nature, function and justification, are the main points of a philosophical examination of property. the systematic exposition of above-mentioned issues might be rightfully called a theory of property. It is, naturally, mandatory in this exposition to attach property to essential human needs for which it stand out, and is supposed to fulfill. In this paper, the author tried to address some of the main philosophical problems concerning property, by exploring and comparing two of the most important theories of property in legal and political philosophy – those of Locke and Hegel. Since the two theories differ in many important aspects, the author’s intention was not only to highlight the main distinctions, but to demonstrate some similarities as well. The focus was mainly on Locke’s theory of property and appropriation in his Second Treatise, and Hegel’s discussion of property under the chapter Abstract Right in his Elements of the Philosophy of Right.

The final part of the paper gives an analysis of Kelsen’s doctrine of tacit alternative clause and serious problems which this doctrine, according to many critics, poses to Kelsen’s theory of legal interpretation while putting in danger sustainability of his entire theory of law. The author examines the sources of this doctrine and in the end reaches the conslusion that this doctrine has its origins primarily in Kelsen’s peculiar understanding of the concept of validity, thus, for the purpose of saving the rest of the Kelsen’s theory of law, propositions to amend Kelsen’s concept of validity are analyzed.

Nowadays, euthanasia is one of the most controversial issues in all the societies. Considering this fact, in this article, the author proposes the solution for a generally accepted definition of euthanasia, which currently does not exist in order to clarify the term ‘euthanasia’. Euthanasia, or the right to dignified death endangers life, the most valuable good, which is essential for the realization all other rights and freedoms. Because of the importance of life, the author proposes the conditions that must be fulfilled, before euthanasia can be performed. The author emphasizes the arguments for and against the admissibility of euthanasia. Also, the existing international and domestic normative frameworks which regulate euthanasia are analyzed. Based on these frameworks, the author proposes the reasons for the constitutionalization of euthanasia within the human rights chapter in the Constitution of the Republic of Serbia, as well as the mechanisms for preventing abuses that may arise and appropriate sanctions which will be imposed in case of abuse. The judicial practice of the European Court of Human Rights has been presented, which in some of its judgments points out the importance of regulating these controversial issues, because they affect essential rights and freedoms, above all, the right to life. Also, there is no common European standpoint on these issues and because of that the European Court of Human Rights leaves a wide margin of appreciation to the states when they are deciding about the regulation of euthanasia. The author is in favor of the constitutionalisation of euthanasia in the Republic of Serbia so that everyone can fully realize their human rights and freedoms, including the right to dignified death. The existence of other controversial legal issues that need to be regulated in the positive law of the Republic of Serbia can affect this issue so it may take some time before the question of constitutionalisation or legalization of euthanasia can be approached.

The Law on the Amendments of the Labour Law adopted in 2014. regulates the award of damages for unfair dismissal and thereby furthers the harmonisation between national and international labour law. Article 191. of the Labour Law regulates not only the award of damages in cases when the reintegration of the employee is impossible, but also in cases when the employee does not request to be returned to his workplace. This paper will focus on the relations between these two types of damages by critically analyzing new legal solutions and by offering arguments in favour of the accumulation of the damages, as well as arguments against it.

Regarding the relation between constitutional protection that is given to a petition right and the fundamental rule of civil law that everybody who causes a damage to somebody is obliged to compensate it, the author is dealing with the question how civil courts should treat complaints for compensation of non-material damage  caused with a petition if there is no criminal verdict and suggests that civil courts should not be bounded with nonexistence of criminal verdict and that they should be allowed to regard criminal act as a prejudicial, previous question and solve the case in that manner, because it is not advisable to leave the aggrieved party without any protection. Furthermore, the other tendencies of civil law will be analisyed which are also important in trials concering the petition right and non-material damage, because courts do not answer in the same way to these problems.